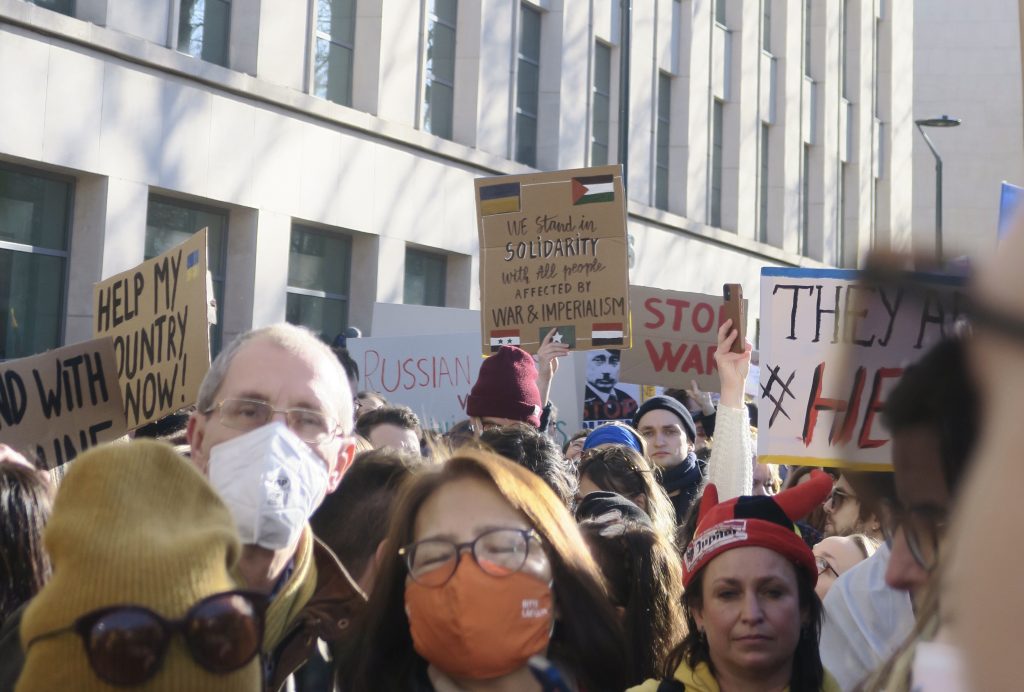 Flags and slogans dotted the crowd and the message was clear: we support Ukraine, Russia should stop this invasion and this goes beyond the borders of Ukraine. People in Brussels felt concerned. Ukrainian flags and EU flags were flying side by side. Some even said that they were ready to cut their gas consumption in order to help Ukraine fight this war. People from Belarus and Georgia also felt the urge to support this protest against Russia. Indeed, the diaspora remembered the annexing of Crimea by Moscow and the 2008 war in Georgia. All these protestors were united by one thing: they are all against Putin and his regime.

russian nationals in the crowd

It was also surprising how many Russian nationals were in the crowd. Marta, the Director of ‘Promote Ukraine’, who organised the protest, says: “Russians are not happy but ashamed by what Putin is doing. Now we see that Russians are active and that they do not want war. Russians even in Russia are doing demonstrations against this war. It is an opportunity to change the regime now.”

Speaking of Europe was present and covering the people’s reactions. You will find them on our social media all this week.

The protest was organised by ‘Promote Ukraine’, a Brussels-based media hub promoting debates between the EU and Ukraine.

Last Saturday was the biggest protest for Ukraine in Brussels, and the first since the war broke out. Local police said that between 3,000 and 5,000 people were present, Marta believes that it was more. She maintains that even more people would have joined if they had known about the protest. “Things were organised too last minute”, she confessed.

Protests were held even last year as flash mobs and demonstrations against the Russian regime. About three weeks ago, the NGO organised a protest near the EU parliament in the presence of between 15-20 A Member of the European Parliament (MEP) is a person who has been elected to serve as a representative in the European Parliament. MEPs supporting their action, among which Petras AUŠTREVIČIUS of the Renew Europe group.

On 19th of February, the NGO had already gathered in front of the Russian mission to the EU. It gathered only 100 people but their demands were what has now been decided by the EU institutions; among which stopping Nord Stream 2, freezing assets of Russian oligarchs and cutting Russia from SWIFT.

Marta concluded on the importance of the protests by saying : “These protests are helping because they are showing governments that people care about Ukraine. If they did not think that their citizens wanted this, they would not be acting on it.”

Several protests will be happening near the Schuman rounder belt, today 28th of February (5pm). The protest will be focussing on banning all the banks from SWIFT, not just a few banks like the EU is planning.