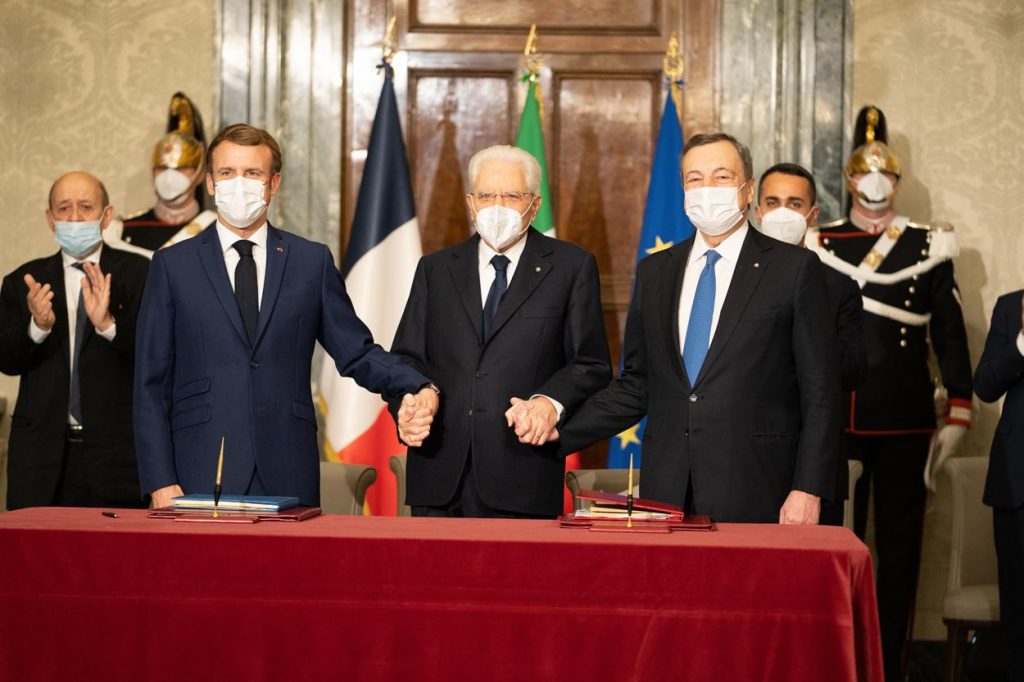 Italy and France signed a treaty to strengthen their relationship on Friday, 27 November. The Quirinale treaty, named after one of the official residences of the President of Italy, touches upon several sectors to foster economic, diplomatic, commercial, and cultural ties between Rome and Paris.

After years of divisions in several policies, the treaty marks an important step forward between the two countries. The treaty was in fact supposed to be sealed in 2017. However, Paris and Rome were on two different pages at that time.

With Italy being led by the coalition between the 5 Star Movement and the League party, the two countries’ policies did not converge on files such as Libya and migration and asylum policy. This provoked an ambiguous and incoherent European response most of the time, with France going in one direction and Italy in the opposite. Industrial policy was also another point of contention.

Only with the arrival of Mario Draghi, the current Italian Prime Minister and former President of the European Central Bank, the relations between Paris and Rome have eased. This is proven by the fact that President Mario Draghi and French President Emmanuel Macron met quite often in the last year.

Diving into the treaty’s content, Rome and Paris reiterated the importance of having a common migration and asylum policy based on European solidarity and shared responsibility.

New forms of cooperation are being established in the agricultural, energy and technology, research and innovation sectors. Agriculture is, for both countries, an important source of revenue. So, they will cooperate to protect their agricultural systems. Moreover, that same day, Draghi and Macron signed an agreement on the space field to increase European competitiveness.

The two Presidents also pinpointed the importance of securing European borders, thus establishing a proper European defence policy that stands next to NATO, without replacing it.

The Quirinale treaty should also be seen in the broader view, considering the European and the global state of affairs.

With Chancellor Angela Merkel leaving the German political scene, the centre of power seems to shift from Central Europe to South-Western Europe. The treaty is also meant to boost European cooperation and foster the European project against the domestic and external background.

Domestically, the Covid pandemic has caused high economic and social issues. Externally, a powerful China, a more assertive Russia and the disengaged United States are a source of concerns. In both cases, a cohesive and united European Union is needed to respond to the current challenges.