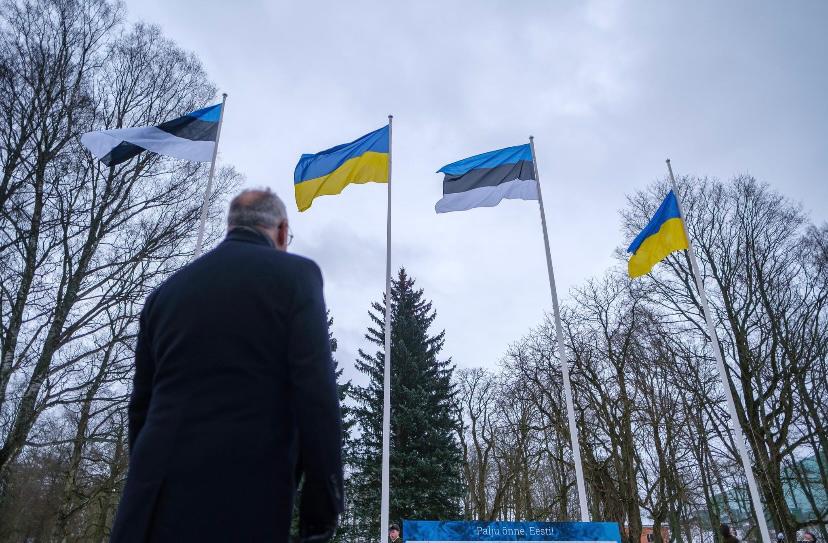 While Estonia is celebrating its Independence Day, many fear an escalation of the Russian invasion of Ukraine. While usually the day is celebrated with a parade, a speech by the president and a lot of potato salad and vodka, this time young people in the Baltic country are jokingly saying: ‘happy last Independence Day’.

Shortly after Russian President Vladimir Putin ordered the bombing of Ukrainian airports, Estonian Prime Minister Kaja Kallas issued a statement: “I condemn Russia’s massive military attack on Ukraine in the strongest terms”, she says. She stresses  that the international community must be decisive and clearly condemn Russia’s actions.

Kallas assures Estonians that there is no direct military threat for their country. “The situation at our external border is calm”, she says. “We are constantly monitoring the situation and are in touch with Ukraine and with our allies”. The day of independence can, according to her, continue in peace.

Young people in the country have been following the situation on the Ukrainian-Russian border closely, though, and are anxious. One of them is Greta Piiskop, an Estonian law student living in the Netherlands. “Ukraine and Estonia have a similar history”, she says, referring back to the time when both countries were part of the Soviet Union. “If we were not part of NATO, it definitely feels as if we would be next in line. Putin has always mentioned the resurrection of the Soviet Union, and Estonia used to be part of that”.

“I started to feel less secure when Trump started to undermine NATO”, she continues. “As a small country, being under NATO’s wing is the only thing that is keeping us from being targeted by Russia as well”. With some 27,000 troops, 20,000 of which are volunteers, and some 60,000 reserve personnel, Russia’s army overwhelmingly outweighs the Estonian military.

Piibe Lukkats, a Global Studies student also living in the Netherlands, says she feels distant. “Being in the Netherlands while the situation is escalating makes me feel helpless. Especially because this time is supposed to be the time when you’re close to your family”. She continues: “I think that it’s coded into Estonians to feel on edge when it comes to Russian tensions. I grew up listening to stories about the time when Estonia was under Soviet rule and never thought that we would face a similar situation again”. Of course Estonia is not under direct threat, but still, the current conflict in Ukraine  shows her that Russia has not given up on its old territories yet.

“The fact that Estonia is not only raising the Estonian flag today, but also that of Ukraine, shows that we sympathize with Ukrainians”, she says. Whether it’s justified or not, Estonians have always had Russian aggression in the back of their minds. “I spoke to my mother a few days ago. She told me she was afraid and told me about when she was in elementary school and had to practice how to put on a gas mask. The tensions on the Ukrainian-Russian border reminded her of the tensions back then”.

The invasion of Ukraine makes this Independence Day different from before. The usual 24 February TV program has been changed to cover the events happening in Ukraine. Piibe will celebrate differently, too. “While celebrating with friends, I’m still thinking of the people in Ukraine. This year I’m not emphasizing the joy but more the appreciation of our independence on a deeper level”.