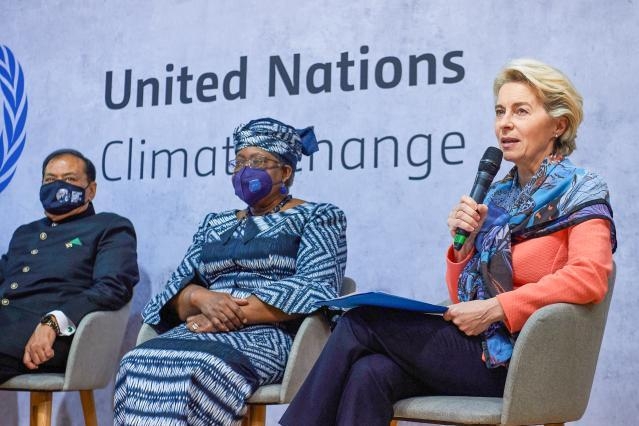 From 28 October until 12 November 2021, world leaders are coming together in Glasgow to discuss climate change and the necessary measures to mitigate its effects in the format of the COP26. The EU’s The 27 countries that are part of the EU. See the list of all members here. member states as well as the The EU’s politically independent executive arm. It is responsible for drawing up proposals for new European legislation, and it implements the decisions of the European Parliament and the Council. European Commission, representing the bloc as a whole, are attending the conference. The Commission’s goal: agree on more ambitious emission reduction targets, put a price on carbon, and scale up investments in climate finance to support developing countries in becoming greener, protect biodiversity, and promote climate-friendly innovation and technology. In her speech at the start of the summit, Commission President von der Leyen stressed that a 55% emissions reduction by 2030 in the EU is crucial for paving the way to net zero emissions by 2050.

The EU’s climate policies all come together in the European Green Deal (more on that here). Additionally, Commission President von der Leyen pointed out in Glasgow that innovation is crucial for more sustainable and climate-friendly development. For this, the EU has launched the initiative Horizon Europe.

The EU’s pledges at Cop26

The The EU’s politically independent executive arm. It is responsible for drawing up proposals for new European legislation, and it implements the decisions of the European Parliament and the Council. European Commission has announced it will contribute to the protection of world forests with €1 billion. Commissioner for International Partnerships Jutta Urpilainen explained:

“The EU’s contribution pledged today to sustainably manage, restore and protect forests will support sustainable growth and jobs, climate mitigation and adaptation, as well as preservation of biodiversity in our partner countries. The European Union will work in partnerships with governments, civil society, indigenous peoples and private actors, in a multilateral approach, to achieve the Sustainable Development Goals and to put people and planet first.”

The aim is to counteract the deforestation that has been going on for decades to create more farming land and usable space. Because crucially, forests can absorb and transform up to 30% of greenhouse gas emissions into oxygen again, thereby significantly mitigating climate change.

Another move towards greener development is the EU’s Global Gateway initiative that von der Leyen presented at a side event of the conference. Similar to the American Build Back Better World Initiative and the UK’s Clean Green Initiative, Global Gateway promotes climate neutral infrastructure projects in low- and middle-income countries around the globe on the basis of partnership with the country concerned.

Lastly, the EU, together with the US and over 100 other signatories, launched the Global Methane Pledge which commits states to reduce methane emissions by at least 30% by 2030 as compared to 2020 level. If all countries stick to the pledge, this will reduce global warming by 0.2 degrees Celsius by 2050.

The COP26 is the 26th meeting of the United Nations Climate Change Conference of the parties that has taken place annually since its launch in 1995 (with the exception of 2020 as the world was shaken up by the coronavirus pandemic). All UN members that have signed the UN Climate Convention are represented at the meeting, with the aim of assessing the implementation and setting goals for reaching the targets outlined in the Climate Convention and the Paris Climate Agreement, adopted by the body in 2015. The main aim parties agreed on in the Paris Agreement was to do everything possible to keep global warming between 1.5-2 degrees Celsius. For that, every country drew up nationally determined contributions, effectively laying out how they were planning to contribute towards achieving this ambitious, but necessary, goal. The current climate landscape and (lack of effective) climate policies of the numerous parties to the COP shows that the current commitments are not sufficient to keep global warming below two degrees. Instead, continuing with the status quo will lead to an increase in the frequency and severity of natural disasters that are occurring regularly already as an effect of climate change. COP26 is therefore of crucial importance for the globe, as it marks the fifth meeting after the Paris Agreement was signed, which requires all parties to present an update of their national implementation plans. As outlined in the UK’s COP26 brief, much more ambitious nationally determined contributions for 2030 are necessary to stay within reach of the 1.5 degrees target. And most importantly, countries must reach net-zero emissions by 2050 if the target is to be achieved and the effects of climate change are to be mitigated.

This, however, requires concerted action by all major industrial nations. The absence of Chinese President Xi Jinping and Russian President Putin raise doubts about their awareness of the severity of the climate crisis.

#COP26 has been named the must excluding COP ever.

This is no longer a climate conference.

This is a Global North greenwash festival.

A two week celebration of business as usual and blah blah blah.

Additionally, climate strikes in front of the venue in Glasgow organised by the Fridays for Future movement exert pressure on state leaders to raise their levels of ambition.

Whether the activists’ voices will be heard and COP26 will be sufficient to slow down climate change sustainably and around the globe, remains to be seen.